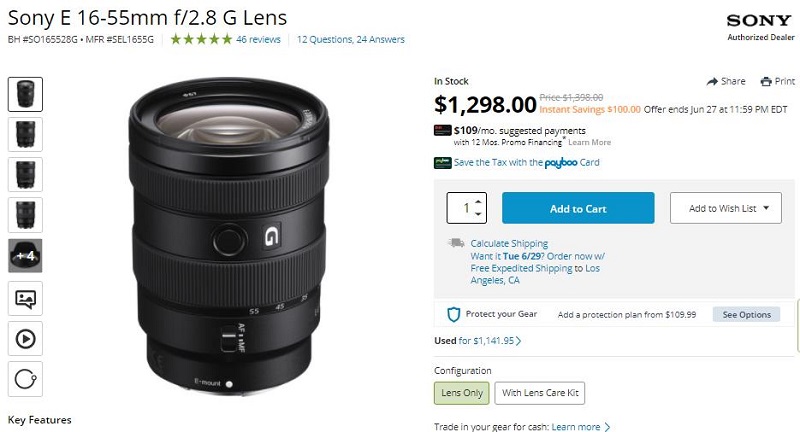 Let’s get the elephant in the room out of the way immediately – the Sony E 16-55m f/2.8 G is not meant to be used without image auto-correction – Sony is making this clear in the settings as well. You can’t switch off distortion correction for JPGs. While this may be disappointing at this price point, most users won’t really care about this question anyway.

With activated image auto-correction it’s probably the best APS-C standard zoom lens there is on the market today. It shows no weakness in terms of image resolution and there are no CAs to speak of. The corrected distortions are – obviously – nothing to worry about. There is still some visible vignetting at f/2.8 but it’s not excessive and stopping down helps, of course. The quality of the bokeh is on a decent level for a standard zoom lens. Out-of-focus highlights are a bit busy but mostly circular and the general rendition is impressively smooth actually.

The build quality is very high but we expected no less from a G-class lens. Sony used quality materials and implemented sealing against the elements. The lens extends during zooming. This may not be ideal but if you want to achieve a decent optical quality, it’s still the way to go for all manufacturers. The AF is pretty speedy and silent. The biggest drawback is probably the lack of an image stabilizer. If you own an A6500/A6600 you won’t care but the vast majority of Sony APS-C users can’t use in-camera stabilization. That being said … if you can afford the rather expensive Sony E 16-55mm f/2.8 G you probably tend to have the latest and greatest camera body anyway. While Sony’s APS-C lens lineup is still far from being complete, it has now assembled an interesting gang of quality zoom lenses – the Sony E 10-18mm f/4 OSS, E 16-55mm f/2.8 G, and E 70-350mm f/4.5-6.3 G OSS represent a quite compelling compact and low-weight combo.