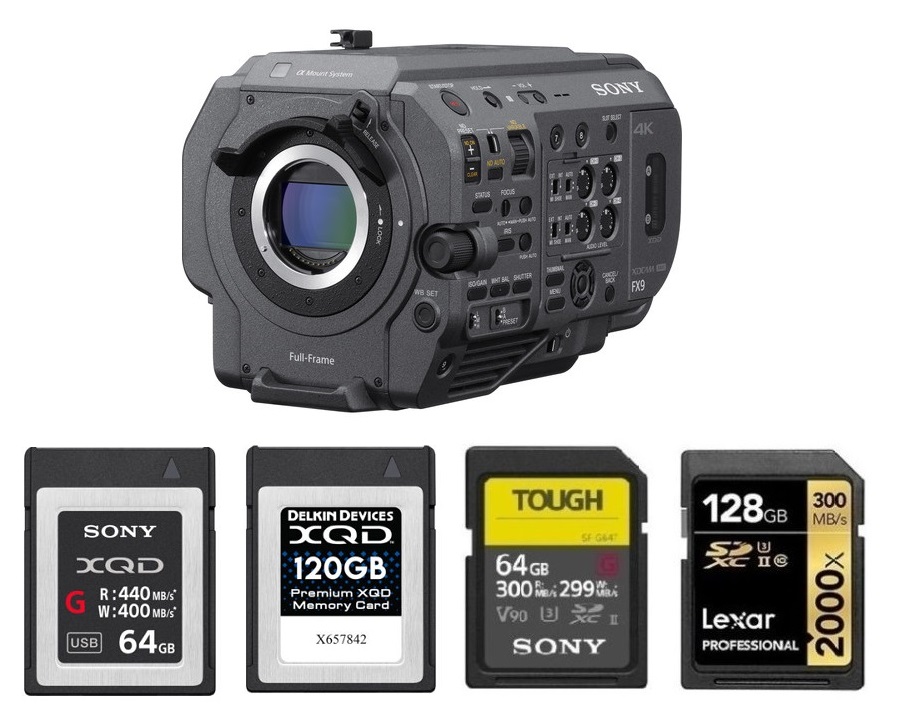 Below is our full list of top recommended XQD cards and SD cards for the Sony FX9 full-frame cinema camera. Hope it can help you get the best out of your Sony FX9 cinema camera.

The Sony FX9 has 2x memory slots that both support the XQD cards for higher overall capacity and faster read and write speeds. When it comes to XQD cards, the choices are very limited – only Sony, Delkin Devices and Nikon released their XQD cards. Offering up to 440 MB/s read speeds and up to 400 MB/s write speeds, the Sony G Series XQD cards are the best choice and the most favorite among professional photographers, allowing it to record 4K video and up to 200 continuous raw still image bursts. In addition, the Delkin Devices Premium XQD cards and Nikon XQD cards are both excellent choice for you. Just choose the one you like!

The Sony FX9 has another one SD card slot that is compatible with the fast UHS-II SD memory cards. Offering maximum read speeds of up to 300 MB/s and maximum write speeds of up to 299 MB/s, the Sony SF-G Tough Series UHS-II SD card is currently the world’s fastest SD card on the market, and it is well-suited for video capture, including 8K, 4K XAVC S, 60p AVCHD, 3D, HFR, and Full HD video, as well as super fast continuous shooting. In addition, the Kingston Canvas React Plus UHS-II SD Card is another great choice and great value SD card for shooting 8K, 4K, and Full HD video, as well as high-resolution photos. Lexar, SanDisk, ProGrade Digital, Delkin Devices also released their super fast UHS-II SD cards, which are excellent choices for Sony FX9 cinema camera. You can just choose the one you like!