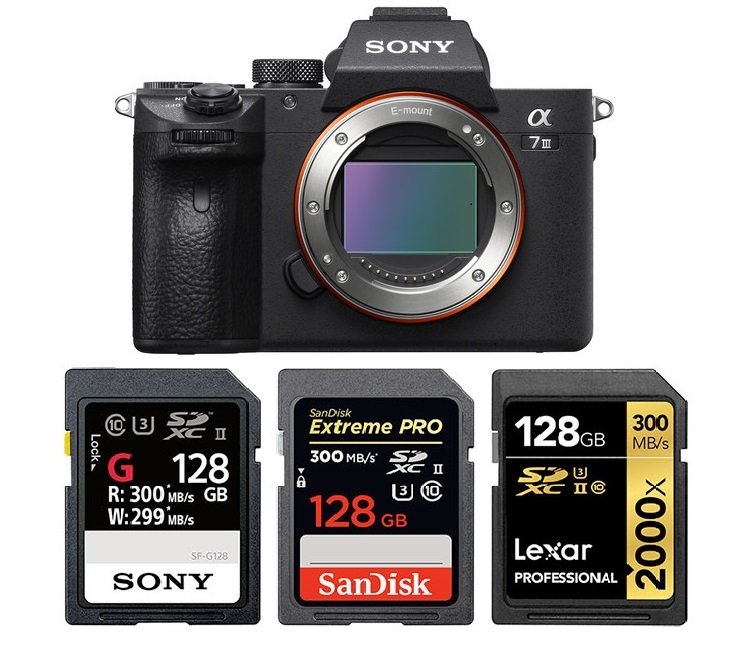 Featuring the updated 24.2MP full-frame BSI image sensor, 693-Point Hybrid AF System, 10 fps Shooting and UHD 4K video recording. the new Sony a7 III ($1,998 at Amazon, B&H, Adorama) comes with two SD memory card slots: The card slot 1 supports ultra-fast UHS-II SD memory cards while the Card Slot 2 is compatible with UHS-I memory cards. If you want to shoot 4K video with the Sony a7 III, a fast UHS-II SD memory card is a must – Fast write speed provides fast buffer clearing time between burst shots optimizing your shooting experience, or you will have to wait longer for the buffer to clear and before you can start taking photos again.

Below is our list of best SD memory cards for Sony a7 III mirrorless camera. Just choose the one you like.

Ranked by write speed – The Sony SF-G UHS-II Cards are currently the world’s fastest SD memory cards boasting an ultra-fast maximum read speeds of up to 300 MB/s and maximum write speeds of up to 299 MB/s and it is well-suited for video capture, including 4K, 3D, HFR, and Full HD video. Up to 299MB/s write speed provides fast buffer clearing time between burst shots optimizing your shooting experience. In addition, with up to 300 MB/s read speed, even large files such as 4K video or a bunch of high-resolution images by continuous shooting can be transferred to PC in seconds.