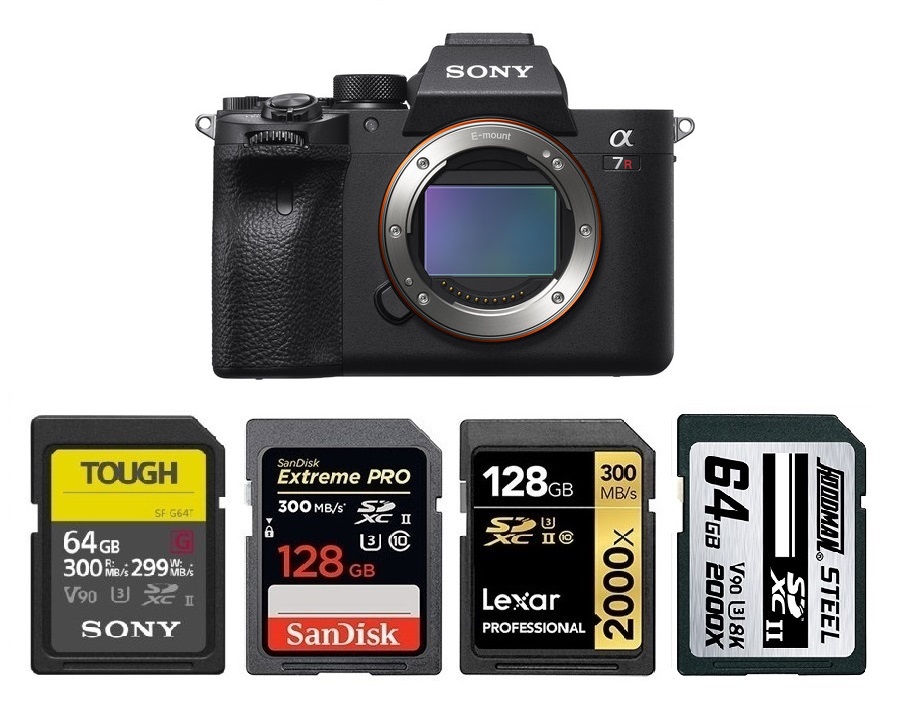 The Sony a7R IV (Amazon, B&H, Adorama) is a hugely powerful camera and it is an ideal camera for landscape photographers, wedding and event shooters, studio photographers that specialize in portraits and product photography, and anyone that wants to make really big prints. Featuring a 61MP Full-Frame Exmor R BSI CMOS Sensor and enhanced BIONZ X image processor, the Sony a7R IV is capable of UHD 4K30p video recording with a wide 14-stop dynamic range and continuous shooting at up to 10 fps at full resolution with full-time AF/AE. Delivering class-leading performance, outstanding autofocus system, excellent autofocus tracking implementation, 10 fps max burst shooting with AF, and excellent AF tracking in video, the Sony a7R IV is a perfect camera for both stills and videos.

First off… What kind of memory card do you need?

Before buying a memory card, make sure it complies with your Sony a7R IV camera. This is what Sony a7R IV requires:

So, the Sony a7R IV has two memory card slots that both support the ultra-fast UHS-II SD cards. That means you can take advantage of the ultra high read (transfer speed) and write speeds (fast buffer clearing time) of UHS-II cards to get the best performance out of your Sony a7R IV mirrorless camera. Dual SD memory card slots allow for flexible file saving and handling and can be configured to partition raw and JPEG files or can be used for overflow recording.

Why Do You Need a High-Speed SD Card?

Not every memory card will work well with your Sony a7R IV mirrorless camera. If the card is too slow, you may have to wait longer for the buffer to clear or end up with recording errors and loose all your footage. So, buying a fast card is always worth it:

So, what’s the best SD card for Sony a7R IV?

The Sony a7R IV supports up to 10 fps burst shooting and UHD 4K30p and Full HD 120p video recording. This requires a fast SD card at least U3 or V30 (writing speed of 30MB/s). UHS stands for “Ultra High Speed”. The chart below can help you figure out what speed class you need for each video format.

If you just want to cut to the chase, here are our top 5 recommended SD cards for Sony a7R IV.

Any of these make for a good choice. If you’d like more detailed recommendations or other brands and models, you can find them below. 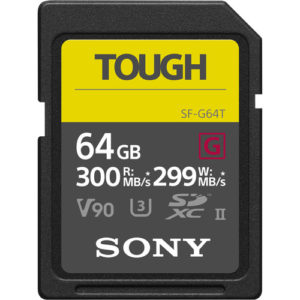 Highly recommended and the Fastest UHS-II SD Card! The Sony SF-G Tough Series UHS-II Memory Cards are currently the world’s fastest SD memory cards boasting an ultra-fast maximum read speeds of up to 300 MB/s and maximum write speeds of up to 299 MB/s and it is well-suited for 4K and Full HD video reacording and super fast continuous shooting. Thanks to its V90 speed class rating, minimum write speeds are guaranteed not to drop below 90 MB/s. So, if you are seeking the highest write speed with a V90 rating as well as extremely high 250-300MB/s read speeds for transferring photos from the card to a computer, this is the recommended cards for you. 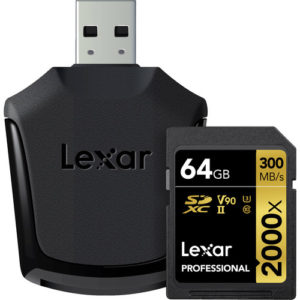 Highly recommended and Best Value! With maximum read speeds of up to 300 MB/s and maximum write speeds of up to 260 MB/s, the Lexar Professional 2000x UHS-II card is the perfect match for any UHS-II compatible camera that records 4K and Full HD video or has a fast 8fps+ continuous shooting speed. The buffer clearing time will be much much quicker which means you can take more shots. It takes advantage of the UHS-II bus to support continuous shutter bursts and rapid shooting, as well as 4K, 3D, and Full HD video recording. Thanks to its V90 speed class rating, minimum write speeds are guaranteed not to drop below 90 MB/s. In addition, you can get a free Lexar SD UHS-II Reader for high-speed file transfer from card to computer, dramatically accelerating workflow. 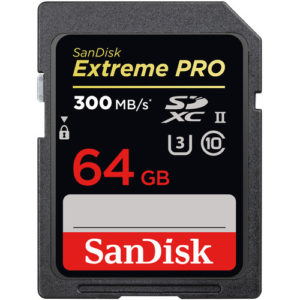 Incredibly Fast SD Card. Designed to meet the demands of professional photographers and videographers, the SanDisk Extreme PRO SD UHS-II Card features read speeds of up to 300MB/s help you maximize post-production workflow efficiency so you stay competitive, while write speeds of up to 260MB/s support advanced camera functions such as continuous burst, rapid shooting and RAW plus JPEG capture. This memory card is an ideal accessory for the new generation of UHS-II-enabled DLSRs and video cameras. 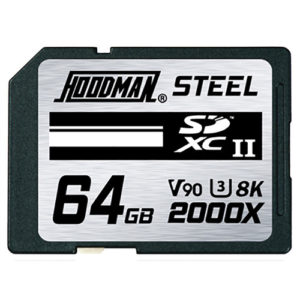 Hoodman Steel is a ruggedized, steel plated SDXC card designed to withstand the rigors of high performance photography/videography. With a ruggedized steel construction, the Hoodman Steel 2000x SDXC UHS-II Memory Card supports 4K Ultra HD video and features a read speed of up to 300 MB/s and a write speed of up to 260 MB/s making it easy to transfer large files quickly and efficiently. Another great choice! 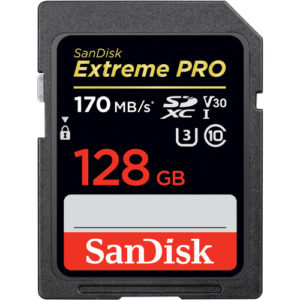 The fastest UHS-I SD Card! We highly recommend picking two UHS-II cards from the list above because of the slow performance of the UHS-I cards. But, if you are on a very tight budget, then you can also get a UHS-I card. The SanDisk Extreme Pro 170MB/s is the fastest UHS-I card on the market with write speeds of up to 90 MB/s and read speeds of up to 170 MB/s and it is ideal for fast burst shooting, 4K video and full HD video at 120fps. In addition, SanDisk Extreme Pro UHS-I cards feature a speed class rating of V30 and U3 standard, which guarantees minimum write speeds of 30 MB/s. Available in 64GB, 128GB, 256GB and 512GB sizes, the SanDisk Extreme Pro 170 MB/s UHS-I cards are ideal for professionals recording extreme sports and other fast-action activities.