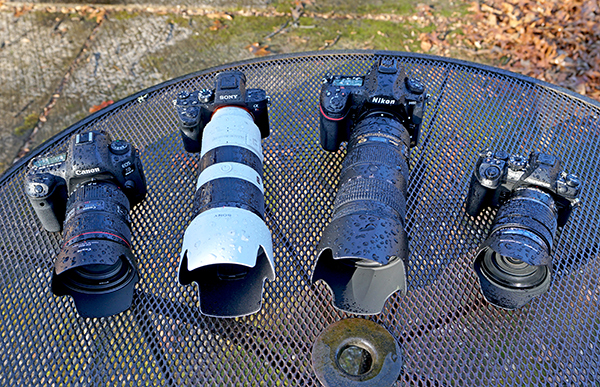 Truthfully, we were sad to see the A7R III have such a hard time in this test. It’s a fantastic camera, absolutely at the cutting edge of what’s possible with photographic technology today. Even after this test, those of us at IR who were fans previously would still happily buy one, because we almost never photograph in conditions approaching those in the test. But as we said in our 2017 Camera of the Year announcement article, Sony needs to up their environmental-sealing game if they want to compete in this high-end/professional market segment. We’d feel differently if all the cameras failed the test; we would have concluded that the test was just too harsh for the current state of the market, even though it was a reasonable representation of conditions a camera might be exposed to. That wasn’t the case, though; the D850 had a very minor problem with leakage into its viewfinder, that seems to be entirely solved by using the BS-3 hot shoe cover – and the 5DIV and E-M1II had no problems whatsoever.